Before we go any further, I thank each and everyone who helped me in my way to achieve this. But for this document I would like to limit them to my mentors Daniel Miller and Fyodor from Nmap for choosing me over several other applicants from all over the globe and for guiding me through the whole process, providing me invaluable resources at times of need and for being so supportive throughout my internship.

This article is divided into following sub-sections.

Hitting it off with Nmap

It was in March 2017, I was told by one of my seniors regarding Google Summer of Code. I’m a penetration tester and security enthusiast (Web application security). So, without any delay I started to see the list of organizations which work on security. There were only a total of 6 organizations and 5 of them caught my interest. They were Metasploit, Nmap, Tor, Honeypot and Radare2. I thought of applying for at least 3 of them and started to do my research on each of them. After a day or two, my inner soul started saying, “You were using Nmap for the past 2 years and its now the time for you to show tribute to Nmap.” Without any second thought I made my mind to contribute to Nmap leaving all the other options behind.

I realized that I’m far away from my peers in terms of knowledge with Nmap codebase and other things related to Nmap. Initially I was a bit worried when I went over to the IRC channel(#Nmap) and found that many of them started their GSOC preparation from Dec'16 and I just started 10–15 days before the deadline. Nmap has its own Scripting Engine known as NSE(Nmap Scripting Engine) for writing the scripts which is written in LUA. I never heard of this language before and on top of that I was left with very few days, still I didn’t loose hope and since I’m a quick learner I was able to learn the language faster than anyone can. But just going through a pair of tutorial websites quickly doesn’t mean you are good with the language. So, to convince myself that I’m good at LUA, I developed a small project in LUA within a day. My LUA project automatically converts your Mozilla browser into a hackers tool kit by installing all the required add-ons. Once I was familiar with LUA, I started to read the Nmap codebase. Nmap isn’t a single tool by itself. It has several other tools like Ncat, Nping, Ndiff and Zenmap. One can contribute to any of these 5 tools through GSOC. The Nmap developers on IRC channel were very helpful. Once I found myself comfortable with the codebase I checked the issues page and picked an issue which matched my interest and I made my first PR. Later on, I felt that going only through the Github Issue Tracker will not help me to write great scripts. Since I’m familiar with Nmap usage, I knew the pros and cons of the available scripts. While I was doing my pentest during my internship, I needed few scripts and those were missing in Nmap. I felt like implementing them would help other hackers during their pentests. This way I started to contribute to Nmap. Few of my PR’s were merged with Nmap very quickly. Yayyy…. felt very happy from inside since I made Nmap better. This incident increased my respect towards Open Source and Nmap. I started being active on the IRC channels and started making PR’s on Github. I submitted my GSOC application two minutes before the deadline. Ufff….. felt like I was just re-born because Google doesn’t extend the deadline at any cost. The results were compiled in a month, in the meanwhile I got myself familiar with Nmap completely and started contributing. In that one month I got invaluable help from Open Source community and Nmap developers which improved my coding abilities and familiarity with the Nmap codebase. To be frank, I totally forgot that I applied for GSOC and I was immersed in contributing to Nmap and I felt proud from inside since I was able to help other hackers by improving Nmap source code. I was submerged in contributing to Nmap, I got a call from my senior at around 23:00 on May 4 saying I got selected into Nmap. Hurrah…..!! I was on cloud9 since I got the chance to work with Nmap through Google.

Official coding starts Me, screwed up with decoding SMB responses (Binary data).I got myself active on GSOC'17 Whatsapp groups, Facebook groups, Telegram channels, Slack channels, IRC’s and so on. I got a chance to meet the best talent from all over the world. I now have connections all over the globe. I got some resources from my mentor which I had to go through before I started actual coding. Since I was anxious, without asking my mentor’s permission I took the chance to work on the ideas I submitted in my GSOC proposal which I later on found was one of the biggest mistakes I had done. Read the next two sections to know why. $ autocomplete feature for nmap Previously, all the developers have to type the commands completely to run their scripts. There are hundreds of scripts and each script has tens of arguments which no one can ever master. So, what happened was every hacker has to check the script file or documentation for using Nmap. I felt like it would be cool if we can provide a feature which can autocomplete the args upon double tapping [TAB]. I noticed that my mentor has a private repo which provides this functionality but it fails to autocomplete the inner arguments which a script expects the user to provide. So, I thought adding that feature would be cool and I started coding it right away without his permission. I made a PR #4 which closed the issue #1 as well in the private repo. $ colored output for nmap

Random capture of response sent by Windows SMB protcol is used by Windows. I had written script that fetches the list of services running on a remote windows system along with their service status message. This has been the most challenging part in my entire GSOC stage. I had less than 2 weeks to complete this task and I just started learning the definitions of SMB, CIFS and so on. Once I was done with understanding the definitions, I tried to write the code. But I wasn’t familiar at all with protocols like SMB, DCERPC, SVCCTL and so on. We can’t send a GET/POST request directly as we do on protocols like HTTP/HTTPS. Its a new game. I found a software created by windows to list the services, psservices.exe. I intercepted the packets sent by psservices.exe. I thought I could easily replicate the requests being sent based on this data.

After seeing the capture I was like WTF is going on. I understood how the requests were being sent but I didn’t know how to code it. I got some useful resources from my mentor, then I figured out a way to establish connection. Finally, wow.. I made the connection and the response looked something like this.

Debugging output which shows a part of request and response sent to the serverPiece of response data received from the Windows server after making a svcctl request I was so happy as I got the response from server and I thought its almost done. The response is binary data and unmarshalling or decoding the binary data was very tricky and challenging task in my whole GSOC period. After a long struggle for two days, the binary data decoded was unmarshalled and it displayed all the services with their service name, display name and service status respectively. Taking up this very challenging task with a narrow deadline gave me immense pleasure of participating in GSOC and I did learn many new things related to Windows protocol and decoding binary data.

Things I learned through GSOC Learnt the kind of background work needed to be done before starting to write the main code. Collaborate with highly experienced people remotely. Breaking the code into components at each stage. In other words, learned writing modular code effectively. Effectively reading technical and research papers. Techniques to be followed while refactoring existing code. Writing scalable code. Experience with openwebnet-discovery protocol script taught this point very well. Improved my exploitation script writing skills. Quickly switch the tasks over and over with ease. Gained knowledge on the SMB protocol and unmarshalling hexdump. Analyzing transfer of packets over wireshark to find the errors. Networking. Don’t dive into new areas directly without any prior knowledge.

Finally, a quote from The Pragmatic Programmer book that inspired me - “Writing code that writes code” differentiates the best from rest and I did this throughout my internship period ;)

To help us develop this template and software sustainably under the MIT license, we ask all individuals and businesses that use it to help support its ongoing maintenance and development via sponsorship.

As a token of appreciation for sponsoring, you can unlock these awesome rewards and extra features 🦄✨

Check out the latest demo of what you’ll get in less than 10 minutes, or view the showcase of personal, project, and business sites.

Wowchemy and its templates come with automatic day (light) and night (dark) mode built-in. Alternatively, visitors can choose their preferred mode - click the moon icon in the top right of the Demo to see it in action! Day/night mode can also be disabled by the site admin in params.toml.

Choose a stunning theme and font for your site. Themes are fully customizable.

Released under the MIT license. 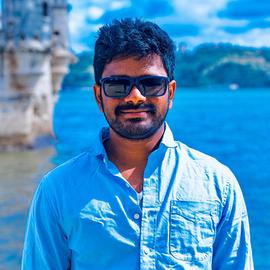 Rewanth Tammana is a security ninja, open-source contributor, and a full-time freelancer. Previously, Senior Security Architect at Emirates NBD (National Bank of Dubai). He is passionate about DevSecOps, Application, and Container Security. He added 17,000+ lines of code to Nmap (famous as Swiss Army knife of network utilities). Holds industry certifications like CKS (Certified Kubernetes Security Specialist), CKA (Certified Kubernetes Administrator), etc. Rewanth speaks and delivers training at multiple international security conferences around the world including Black Hat, Defcon, Hack In The Box (Dubai and Amsterdam), CRESTCon UK, PHDays, Nullcon, Bsides, CISO Platform, null chapters and multiple others. He was recognized as one of the MVP researchers on Bugcrowd (2018) and identified vulnerabilities in several organizations. He also published an IEEE research paper on an offensive attack in Machine Learning and Security. He was also a part of the renowned Google Summer of Code program.